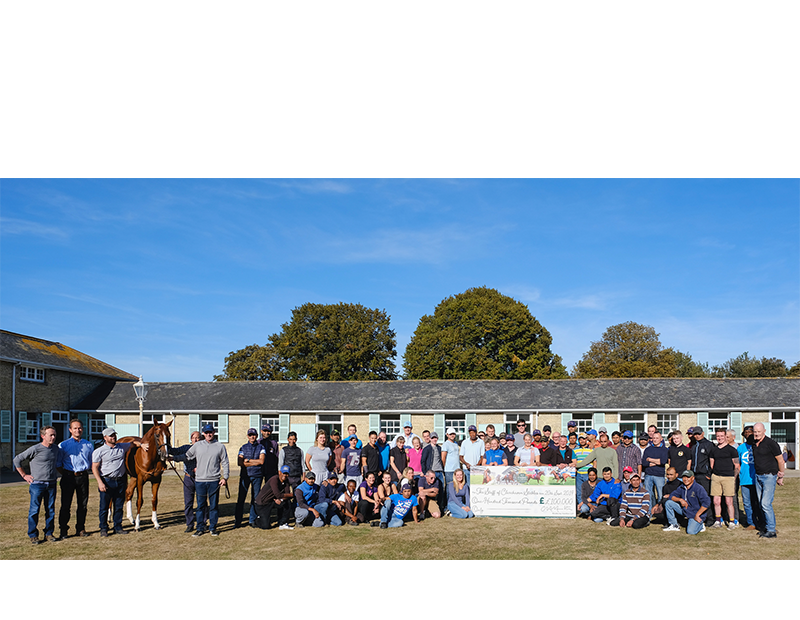 In the same very generous gesture as last year, Bjorn Nielsen asked for their £75,000 to be increased to £100,000 out of his own percentage and there were understandably many happy faces.

The magnificent chestnut looked on at all the lads and lasses whose tireless work is such a key ingredient of any stable’s success and it is fantastic to see them rewarded in such a tangible way. Stradivarius embodies everything that is so compelling about the thoroughbred and the devotion shown to him by his lad Surinder Palmar and the rest of the Clarehaven team could not be more obvious.

John Gosden said “ The Weatherbys Hamilton Stayers’ Million is a fantastic concept and has been a massive success over the last two years. It has obviously been the source of great interest to all my staff and to be able to participate in a bonus of this size is very significant and hugely appreciated by them”

Charles Hamilton said “ We have enjoyed every moment of the Stayer’s Million over the last two years but one of the highlights has been being able to present such a significant cheque to the stable staff. Behind every great horse there is a great team and to see Stradivarius looking in such magnificent condition towards the end of a long season is a massive credit to them all. John Gosden’s and Frankie Dettori’s expertise speaks for itself but the health and happiness of horses such as Stradivarius is as much in the hands of those who groom, ride and lavish attention on them every day. Stable staff play an indispensable role and are the cornerstone of racing all over the world".